Corinna Cisneros did not take her decision to pursue engineering lightly. As a single working mom going to community college full time, she wanted to be sure that more time in school would land her in a fulfilling career.

At Tacoma Community College, Cisneros excelled in math and worked as a tutor and supplemental instructor. Her plan originally was to pursue teaching, but co-workers recognized her potential for engineering and recommended she consider the field. After diligent research exploring the profession, this first generation college student set her sights on a bachelor’s program at Washington State University, a move that would mean two more years of school.

“I wanted to show my daughter that education is important,” Cisneros said, “that no matter how much money you have, whether you’re dirt poor and have family support or not, that getting your education is achievable.”

A family of support to succeed in STEM at WSU

After finishing two years of prerequisites at Tacoma CC, she moved herself and her 8-year-old daughter across the state to start her degree in mechanical engineering at WSU. Almost immediately after classes started, Cisneros found support in the Team Mentoring Program (TMP), a unique opportunity for underrepresented transfer students and sophomores to get support in pursuing STEM and pre-health degrees.

“I met one of the program organizers and quickly realized it was about more than a scholarship,” Cisneros said. “TMP offered a support system of people who understood my situation, who I could go to when things got hard.”

The program launched in 2007 in response to a noted lack of diversity in STEM programs at WSU, even while overall minority enrollment had increased. Manuel Acevedo, director of WSU’s Office of Multicultural Student Services, had been running a successful freshmen mentoring program that helped orient first generation and underrepresented students to college life. The program improved freshmen retention rates, so he thought a similar program that focused more on research and career preparation could help retain upperclassmen in STEM and pre-health degrees. 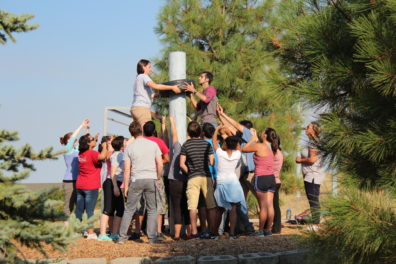 Not your grandma’s mentoring program

“The students in this program are smart and hardworking,” said Mary Sanchez Lanier, a WSU assistant vice provost who helped launch TMP. “They just need some additional tools and encouragement to be successful.”

The program brings upperclassmen and faculty mentors together with sophomores and transfer students in a team atmosphere. The student mentors also learn valuable leadership skills, providing support and workshops that help mentees with academics, internship and career preparation, as well as general support in getting through day-to-day challenges of being a student.

The faculty mentors provide hands-on research opportunities. In addition, scholarships provided by TMP allowed Cisneros to conduct research year-round while also providing for herself and her daughter.

“TMP provided a lot of opportunities for me,” Cisneros said. “I got to work in a lab, present my research in Boise, and encourage others to pursue research and believe in their ability to be successful.”

Many of the mentees in the program become mentors, resulting in a very strong network of peers. Acevedo and others at TMP have also built good relationships with Washington companies, which connected Cisneros to an internship at Boeing the summer before graduation. By the time she was receiving her diploma, she already had a job waiting for her in Everett. Almost in her second year as a mechanical engineer there, Cisneros still has big plans for her future.

“My daughter is in 7th grade now, but when she graduates high school I’d like to start my master’s degree,” Cisneros said. “I want to keep learning and striving to do better.”