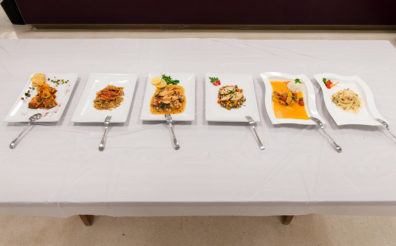 The MATS technology developed at WSU and exclusively licensed by the company 915 Labs is on its way to revolutionizing packaged food.

Commercial food packaging is a mainstay of the food industry; a staple in homes for its convenience and cost-effectiveness, and in military and humanitarian efforts due to its long shelf life. However, current processing methods strip foods of their nutritional value while adding preservatives and sodium, placing them at the center of debates about unhealthy diets and growing rates of obesity and diabetes.

WSU researcher Juming Tang developed microwave-assisted thermal sterilization (MATS), a technology that eliminates food pathogens and spoilage microorganisms quickly while still maintaining nutritional value. The packaged food is immersed in pressurized water and is simultaneously heated with microwaves at a frequency that penetrates food more thoroughly than those in conventional microwave ovens. Food packaged with this process also retains more of its flavor, allowing for a wider variety of healthier, tastier packaged foods.

How it all began:

Research started in Dr. Tang’s lab more than 20 years ago led to the development of MATS. After attending a meeting of the International Microwave Institution, Dr. Tang decided to tackle a technical challenge that has long prevented the food industry from exploiting the rapid heating capabilities of microwaves: ensuring uniform and reproducible heat treatment. He designed the MATS system to use a combination of microwave heat and a hot water tunnel to very rapidly heat packaged food to sterilization temperatures, and hold it at the appropriate temperature for a minimum amount of time before very quickly cooling it down. The research attracted funding from the U.S. Army and Kraft Foods, who were looking to improve military rations and macaroni and cheese, respectively. In 2006, WSU patented the design for the 915 MHz single-mode MATS technology for producing prepackaged, low-acid foods. After four years of gaining FDA approvals, WSU licensed the MATS technology to a startup company that was purchased by 915 Labs in 2014.

Learn more about the research behind this technology:

What the future holds:

According to a press release from 915 Labs, major food companies are now using a small-scale MATS-B system to develop recipes for new products and for small production runs. 915 Labs is building MATS-30 commercial production systems capable of processing up to 10 million units annually, including single-serve trays, pouches and food service packaging formats. These systems will allow companies to start full-scale production.

The first MATS-processed foods hit stores in Asia in June, and should be available at U.S. retail sites later in 2017. 915 Labs has created its own signature dishes, including macaroni and cheese and an egg frittata, and plans to launch in partnership with Amazon and a food company on the Amazon Exclusive platform.

*Much of this content was adapted from an article posted in the Better World Project developed by the Association of University Technology Managers, and a press release from 915 Labs.