Greek yogurt is one of the most popular dairy products in America. The benefits of yogurt consumption are well-documented, but production of the popular snack results in a large amount of acidic whey; a byproduct that causes an economic and environmental challenge. 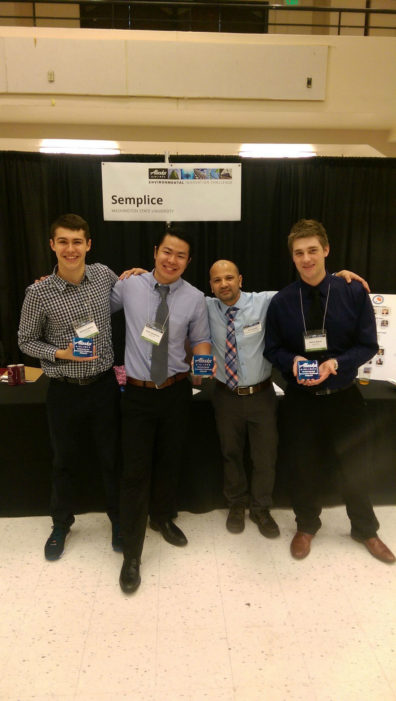 Disposing of the acidic whey requires hauling trucks of the yellowish liquid away daily, resulting in significant carbon footprint for the industry. Once it is hauled away, disposal options are limited since the byproduct is toxic to aquatic life and causes significant stench in landfills. While large companies can afford onsite bioreactors that turn waste into energy, many smaller operations – such as the WSU Creamery – do not have the resources for bioreactors or other expensive systems.

Companies are working with universities to find more economic, environmentally-friendly ways to deal with the whey – and a startup team from Washington State University may have found the tastiest solution to date.

Semplice – a company launched by food science researchers and students at WSU – used the whey to develop a new low-calorie beverage that provides a boost of electrolytes. The product is in line with current dairy trends, as the industry is seeing a spike in drinkable yogurt sales.

Most of the solutions for making better use of acidic whey so far have focused on extracting nutrients that have other value in the food industry, like lactose.

“After extraction, those options still leave water behind,” Jiwan said. “At the prototype scale, our product can make use of all the whey, reducing water waste.”

Semplice’s product is reminiscent of many adults’ favorite childhood summer treat: creamsicles. The flavor makes it particularly appealing to one of the team’s target audiences, moms looking for a healthy snack for their kids. The drink also has a bit of the fermentation tang popularized by kombucha, a favorite among millennials, Semplice’s second target audience.

Understanding those target audiences led the team to win first place at WSU’s Business Plan Competition. In addition, they were selected to present at the “lightening round” speed pitch session at the CleanTech Showcase, which led to interest from regional angel investors. Semplice is also in conversation with a couple major food brands about possible partnership.

Support from the National Science Foundation I-Corps program at WSU was critical to bringing the team together and conducting the market research that helped them stand out. The 3-year grant supports an 8-week lean accelerator program for entrepreneurial teams, as well as funding travel to meet with customers and industry experts. Without I-Corps, the formula for the drink, which was actually developed by students in 2014, could have remained on the proverbial “lab bench.”

The proprietary process that turns the acid whey into a sports drink was developed by a team of undergraduate and graduate students in the joint WSU-University of Idaho food science program. The students developed and perfected the drink formula to enter in a food competition – and won second prize. The students involved went on to graduate without pursuing the process of taking the product to market. However, the faculty advisor Mike Costello, brought the product and a new team of students to the I-Corps program before retiring in 2016. He now serves on the advisory board of the company.

“Costello’s vast experience working with product development and his industrial relationships make him a critical part of the board,” Jiwan said.

Jiwan had his first taste of entrepreneurship as a co-founder of Phytelligence, a company launched by WSU researcher Amit Dhingra that is helping orchardists reduce water and grow trees faster.

“Research for me has always been about developing something that will have an impact on people or an industry,” Jiwan said.

He originally came to I-Corps with an idea for a different product, but met Charles Diako, who helped develop the Semplice product, and decided to join that team instead.

“When I was between jobs I was always looking for the lowest cost, healthy food options for my family,” Jiwan said. “The product Charles and previous students developed had potential to become a product I would have benefited from then.”

Since Diako and Jiwan both came from scientific backgrounds, they wanted to add business and marketing experience to the team. Jiwan decided to recruit from undergraduate communication and marketing classes so the company could also serve as a learning experience for students. Three ended up joining the team, and their expertise combined with the market testing supported by I-Corps led to Semplice’s first place win from among 42 competitors in the WSU Business Plan Competition.

The students, Henry Baker, Andrew Jaboro and Alexander Wu Hagen, are still working for the company over the summer. They are developing branding, a website and researching market opportunities.

“I would encourage other undergrads to get involved with a startup while in school,” Baker said. “The teamwork and problem solving required is helpful in all aspects of life.”

Jaboro has also started mentoring a high school student who is a member of Future Business Leaders of America (FBLA), and working on an entrepreneurship project. Jaboro and Jiwan will guide the student through the process of starting a company.

“Teaching others is often the best way to learn, so it is a win-win,” Jimwan said. “Plus, paying it forward is a motto of the company.”

No matter how far Semplice makes it through the startup world, Jiwan is grateful for the experience and the impact it has for the students involved.